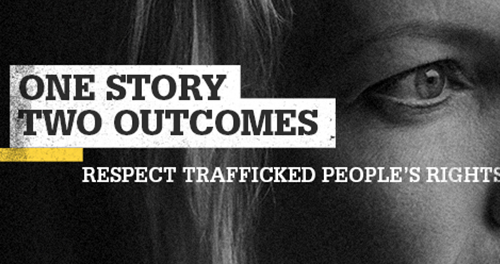 Under international law victims of human trafficking have important rights. These rights help them to recover from their experience of being trafficked. It gives them a chance to rebuild their lives. Unfortunately, all over Europe trafficked people’s rights are often not respected, leaving them vulnerable to re-trafficking. The provision of rights can therefore make a world of difference.

For this reason the La Strada International NGO Platform – United against human trafficking in Europe – has launched a campaign to urge governments to fully implement anti-trafficking legislation on the ground.

Our campaign “One Story, Two Outcomes” tells the story of trafficked persons and how the provision of services has made a difference.  The first story is of Anna, a woman who finds herself  exploited abroad by her ’employers’. What happens to her illustrates what it means for an individual if rights are not respected, and what happens when they are.

The rights of trafficked people in Europe

The Council of Europe Convention on Action against Trafficking in Human Beings is ratified by almost all countries in Europe. In 2011 the EU countries adopted the Directive on preventing and combating trafficking in human beings and protecting its victims. According to these legal frameworks people who have been trafficked have the following rights: