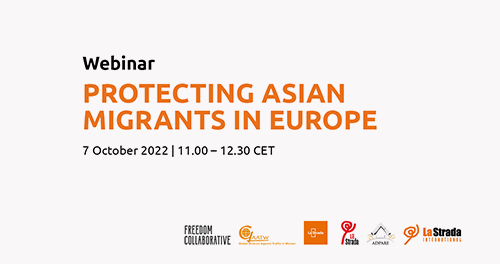 On the 7th of October – World Decent Workers Day – La Strada International co-organised the webinar ‘Protecting Asian Migrants in Europe’, together with Freedom Collaborative and Global Alliance Against Traffic in Women (GAATW). This webinar celebrated the launch of LSI’s new report Protecting Asian Trafficking Victims in Europe. In Focus: Czech Republic, Poland, and Romania and its accompanying Policy Paper. The report is based on desk research and interviews conducted by LSI members La Strada Czech Republic, La Strada Poland and ADPARE (Romania).

With this webinar and the research, La Strada International aims to raise attention and awareness for the growing group of vulnerable Asian migrants recruited to work in Europe. The research shows that many Asian migrant workers end up in low-paid jobs in Europe, where they are not properly protected against serious forms of exploitation, and risk to fall prey to human trafficking or forced labour.  The report sheds light on the difficulties in the application of the legal definition of human trafficking, as well as the practical issues involved.

On paper, Asian TCN migrant workers are protected against severe forms of labour exploitation and abuse, as the Czech, Polish, and Romanian legal frameworks comply with international and EU legislation relating to the prevention of human trafficking and forced labour. However, in practice it is observed that both access to support and access to justice are often lacking. Many Asian migrants in exploitative situations are never identified as (potential) victims of human trafficking and consequently do not receive any of the crucially needed support. Furthermore, these crimes are only scarcely reflected in case law, meaning that the perpetrators of exploitative practices go unpunished.

The webinar ‘Protecting Asian Migrants in Europe’ highlighted that more awareness, resources and capacity building is needed to protect Asian migrant workers recruited to fill the labour shortfalls in Europe. The webinar recording can be viewed here.