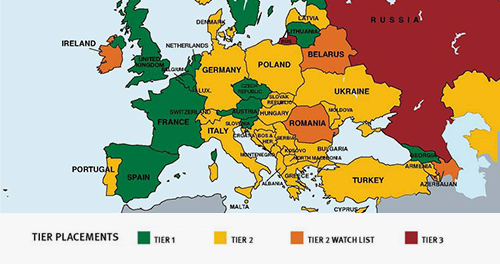 On July 1, the US State Department released its 2021 TIP Report. Like last year, the report reflects on the impact of COVID-19 and highlights substantial changes in financial situations, such as the reduction of wages and work hours, closure of workplaces, rising unemployment, and reduced remittances, coupled with the rise in costs of living and disruptions to social safety networks, which created new precarious situations. The report reveals that low-wage and migrant workers and those in the informal economy faced riskier employment conditions, including restricted movement, minimal oversight mechanisms, withheld wages, and increasing debts are all indicators or flags for human trafficking. The report further acknowledges that governments faced the predicament of shifting priorities to focus on growing health and economic concerns, which drew attention and resources away from anti-trafficking efforts. According to the report, anti-trafficking actors experienced an all-around decrease in resources and operations. NGOs from various countries separately reported significant funding cuts due to COVID-19, which forced some to halt all assistance or cancel certain victim-support services.

Interestingly the report, also makes clear that while the TIP Protocol calls on governments to proactively address trafficking crimes, some governments are also part of the problem and directly compel their citizens into trafficking or forced labour. The 2021 Report refers to 11 governments with a documented “policy or pattern” of human trafficking, trafficking in government-funded programs, forced labour in government-affiliated medical services or other sectors, sexual slavery in government camps, or the employment or recruitment of child soldiers, which include Belarus and Russia for Europe. According to the TIP report, the Russian government was actively complicit in the forced labour of North Korean workers.