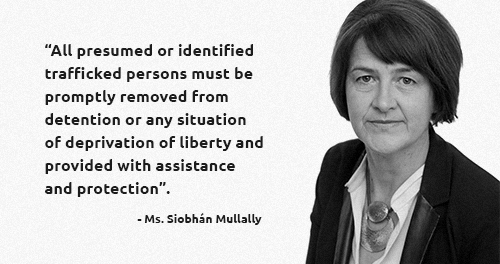 The UN Special Rapporteur on Trafficking in Persons, Ms. Siobhán Mullally will publish her new report at the 47th HRC. For this report on the Non-Punishment Principle in International Trafficking and Human Rights law, La Strada International submitted written input and joined a consultation earlier this year, outlining legal and practical challenges, faced by LSI members in the European context and provided recommendations for change.

Taking stock of previous research conducted under the UNSR Trafficking mandate – see the 2020 position paper on the non-punishment principle by her predecessor – this new thematic report provides an overview of the recognition of the Non-Punishment (NP) principle in various legal instruments and jurisprudence, making a link between the principle of non-punishment and States’ obligation of due diligence.

Despite its recognition in international instruments, the Rapporteur acknowledges challenges related to the application. The report does not reflect much in detail about the difficulties civil society actors face with the actual implementation of the non-punishment principle and related requests to lift administrative sanctions and detention, in particular also due to lack of awareness among legal professionals of when and how to apply the principle. Trafficked persons are still regularly punished through administrative detention, the imposition of fines, forced return and refoulement, or the prosecution for crimes which were committed as a direct consequence of their trafficking situation.

Some successful applications of the non-punishment provision do exist but these positive experiences are more the exception than the practice. LSI members in Serbia, Spain, Netherlands, Germany and Austria reported successful applications of the NP provision, concerning violations of alien law, use of false documents and offenses related to involvement in sex work. (See Annex LSI’s submission). Overall however, LSI members reported failures to apply the non-punishment for all forms of human trafficking, but in particular in cases of trafficking for forced criminality, where victims seem more automatically regarded as perpetrators.

The report acknowledges that ‘failure to respect the principle of non-punishment leads to further serious human rights violations’. According to the Rapporteur, non-punishment should be understood as a compulsory tool that is required to be applied by all domestic authorities and investigative, prosecutorial and judicial authorities, when a situation triggering the application of non-punishment is first identified.

Mullally further calls for the principle of non-punishment to be applied without discrimination to all trafficked persons, including to trafficked persons seeking asylum or other forms of international protection. To further facilitate its application and avoid issues of interpretation, she also recommends a specific non-punishment provision to be incorporated into domestic legislation, favouring a causation link over a duress model and covering all types of unlawful acts. ‘These should include criminal, immigration, administrative or civil offences, and not “status-related” offences only, which should follow a full assessment of the individual situation of the victim of trafficking’ . To ensure compliance with the NP principle, the UNSR recommends that “all presumed or identified trafficked persons must be promptly removed from detention or any situation of deprivation of liberty and provided with assistance and protection”. In the report, she further calls upon States to ensure that prosecutors are under a duty to discontinue proceedings against trafficked persons for all offences committed as a direct consequence of their situation as trafficked persons.