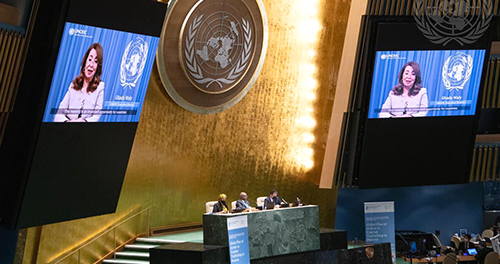 On 22 and 23 November in New York, the UN General Assembly adopted a Political Declaration to reconfirm its commitment made against human trafficking. UN Member States reaffirmed their  strong political will to take decisive concerted action to end human trafficking.

At this high level meeting, UN Members States appraised the progress achieved in the implementation of the Global Plan of Action to Combat Trafficking in Persons, which was adopted in 2010. This appraisal takes place every four years and provides an opportunity to acknowledge achievements and reflect on existing gaps and challenges.

UN State Parties also devoted to ensure that victims are treated with respect and dignity and are not inappropriately penalized or adversely affected by laws, policies and other actions taken by government authorities and communities for acts that they commit as a direct consequence of their trafficking situation. The declaration makes clear that non-punishment should apply to all unlawful activity that a victim of trafficking in persons has been compelled to be involved in as a direct consequence of their trafficking situation and for all types of punishment, including criminal, civil, administrative and immigration offences. (para 12 and 13)

Moreover UN States committed to undertake appropriate measures to facilitate access to justice and protections for victims of trafficking in persons that should not be conditional on their participation in criminal proceedings, taking into account national legislation. In addition States agreed to take steps to ensure that effective remedies, including for damage suffered, are available. (para 13.). In the declaration States further acknowledge the need to provide sufficient, reliable, sustainable and predictable resources for national trafficking in persons strategies; (para 16) and emphasized the need to establish firewalls between immigration checks and labour inspections, and/or to ensure that labour inspections are conducted in such a way that does not put potential victims of trafficking in fear of immigration authorities or offences. (Para 28)

States further stress the importance in implementing labour standards improving government procurement practices in efforts to promote decent work and the need to develop awareness-raising and educational programmes in partnership with civil society and the media to counter any acceptance of the use of forced labour and exploitation in the production of goods.

Earlier this year in July, LSI contributed to a global hearing on the action plan through an intervention. See more