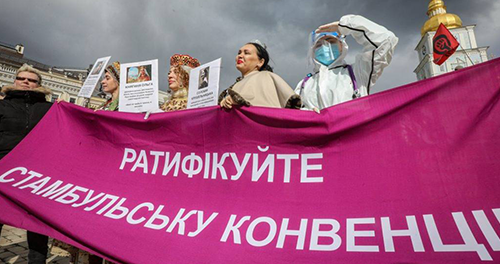 On 20 June, Ukraine’s parliament passed a bill ratifying the Istanbul Convention, the key human rights treaty on preventing and combatting violence against women.

After years of advocacy and calls from human rights activists including La Strada Ukraine, Ukraine finally adopted the treaty amid its EU membership bid. La Strada Ukraine calls it a ‘historic moment’ and hopes that the ratification will reduce domestic violence in the country.

Some EU members have said ratifying the convention was a precondition for approving Ukraine’s candidacy status. Earlier strong opposition from churches and conservative politicians over the use of the term “gender” in the text was among the main obstacles.

Human rights activists have long called for changes in the legislation to impose harsher punishments for offenders of gender-based violence. The convention’s ratification will expand the list of abuses punishable by law, but Ukraine will also need to change its legislation, such as defining liability for sexual harassment, Alyona Krivulyak, of La Strada-Ukraine NGO hotline hopes that the ratification will decrease both the number of gender-based violence and domestic violence cases while also increasing resources of assistance available for victims.

See earlier video made by La Strada Ukraine (in Ukrainian only) for the promotion of the ratification of the Istanbul Convention https://youtu.be/qwTvEv4cgy4