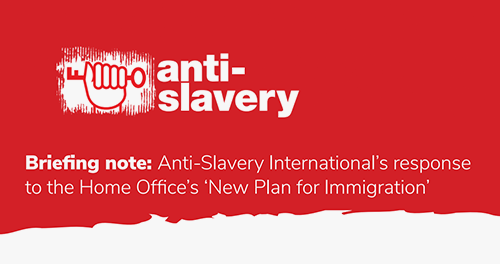 Late March, the UK government released a new Plan for Immigration, which aims to “deter illegal entry” and to “remove more easily from the UK those with no right to be here”.  Anti-Slavery’s policy manager Kate Roberts explains ASI’s position on the UK Government’s immigration consultation. See also ASI’s briefing on the consultation.

The plan heavily focuses on deporting people and lowering safeguards for those who cannot be returned. In particular, the plan seeks to ensure the rapid removal of inadmissible cases to the safe country from which they embarked or to another safe third country. In parallel, it introduces a new temporary protection status with less entitlements and limited family reunion rights for people who are inadmissible but cannot be returned to their country of origin or another safe country.