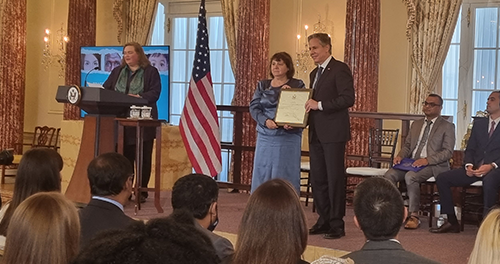 On 19 July the US government launched the US TIP report, which assesses the efforts by governments worldwide to prevent human trafficking; protect victims and prosecute traffickers. La Strada International is very proud that two of our close colleagues, the President of La Strada Poland, Ms. Irena Dawid Olczyk and the President of La Strada Ukraine, Ms. Kateryna Cherepakha were both awarded today the ‘2022 TIP Report Hero Acting to End Modern Slavery Award’. See here the 2022 US TIP report.

This is a big recognition for their and our joint work. Both Ms Irena Dawid and Ms. Kateryna Cherepakha have for long been active in the anti-trafficking field; Irena Dawid since 1995 and Kateryna Cherepakha since 2000. They have been dedicated to raise awareness about human trafficking and to obtain political attention and governmental commitment, next to assisting large groups of victims with information, advice and direct support. Together with their colleagues, they have been advocating for better access to rights for victims of trafficking and gender based violence at national and international fora.

This year, when the war broke out in Ukraine, both their organisations have been working on the frontline, quickly responding to urgent needs. Day in day out, they have committed themselves to contribute to the prevention of human trafficking by ensuring that Ukrainian IDPs and refugees were informed and supported to seek help. Together with them we hope that this recognition will help to raise further awareness for victims support and create also more recognition for the role of civil society in the anti-trafficking field. CSOs are still often excluded from providing meaningful input into the legislative and policy-making processes in the anti-trafficking field.

The U.S. Department of State has produced the Trafficking in Persons Report (TIP Report) since 2001. Required by law under the Trafficking Victims Protection Act (TVPA), the TIP Report provides an assessment of the efforts by foreign governments to combat human trafficking.

As a part of the TIP Report, the Department of State honours individuals around the world who have devoted their lives to the fight against human trafficking by awarding them the TIP Report Hero Acting to End Modern Slavery Award. The TIP Report Heroes often include NGO staff and government officials, from lawmakers to police officers, who are committed to ending modern slavery. They are recognized for their tireless efforts—despite resistance, opposition, and threats—to protect victims, punish offenders, and raise awareness of ongoing criminal practices in their countries and abroad. To date, more than 110 individuals have received this award. 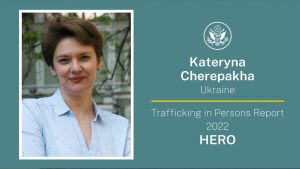