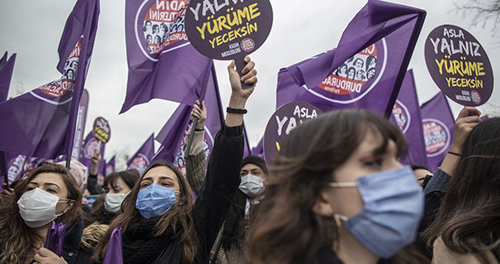 The decision of the President of Turkey on 20th March to withdraw from the Council of Europe Convention on preventing and combating violence against women and domestic violence (CETS No.210), has led to strong protest in Turkey and abroad. The Convention which aims to prevent violence against women, protect victims and prosecute perpetrators, upholds women’s fundamental human right to a life free from violence. The Convention is also a milestone for undocumented women and for women with precarious residence status because it expressly forbids discrimination based on migration status and requires states to make it possible for women whose status is dependent on a violent partner or spouse to obtain an independent residence status. As such the Convention is very important for those in exploitative situations, who often very vulnerable for trafficking practices.

Women rights activists, civil society organisations, legal experts and others in Turkey opposing the President’s decision and organising demonstrations in different Turkish cities, have stated that withdrawing from this international agreement can only be done through parliamentary endorsement. The Council of Europe reacted by stating that ‘leaving the Convention would deprive Turkey and Turkish women of a vital tool to counter violence’.  Violence against Women is actually a big problem in Turkey. According to Turkey’s ‘We Will Stop Femicide Platform’, at least 300 women were murdered in the country last year but the number could be even greater, with dozens more found dead in suspicious circumstances.

Ten years ago, Turkey was actually the first country to sign and ratify the Convention, at its launch in the Turkish city of Istanbul, hence the convention if often referred to as the Istanbul Convention. La Strada International member representatives Turkey, Ukraine and Bulgaria have reacted with concern and fear that the withdrawal by Turkey will also have negative impact in other countries, where civil society organisations still lobby for the ratification of the Convention. The Istanbul Convention addressing Violence has not been ratified by several European countries, including EU countries Bulgaria, Czech Republic, Hungary, Latvia, Lithuania and Slovakia. La Strada International has been calling up the European Commission to urge EU Member States to ratify the Convention and the EU itself to accede to the Istanbul Convention.