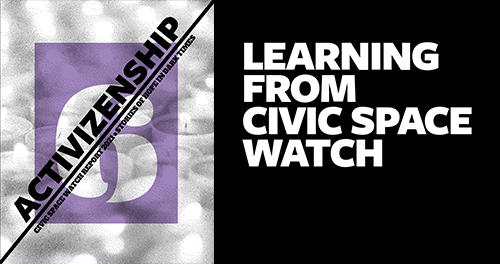 A new report: Civic Space Watch report 2021: Stories of hope in dark times’, published by the European Civic Forum showcases civil society’s role in the past two years in the context of the COVID-19 pandemic. In the report, the authors stress that democratic institutions must play their crucial role responding to society’s needs, including through support for civic organisations to preserve their role as independent actors. Especially now many civic and social actors play a crucial role in helping Ukrainian people and others in need, often with only few resources and little power. The report highlights 10 aspects of the challenges civil society faced throughout the year 2021.

In the anti-trafficking field, La Strada International and other NGOs have also frequently raised concerns about the legal and practical challenges affecting civil society’s daily work in recent years. These range from changes in the legal environment, challenges in funding and access to resources, obstacles in accessing policymaking, and threats and attacks against members of staff.

The 10 main challenges civil society faced throughout the year 2021, according the report are:

As there is no proper framework in place to uphold civic rights. CSOs are often excluded from political decision-making and/or face increasing difficulties in accessing decision-makers and providing meaningful input into the legislative and policy-making process. The European Civic Forum and La Strada International are therefore strongly supporting the European Parliament’s call for a European civil society strategy to nurture and protect civil society.  Addressing Civic Space is one of the priority focus areas of La Strada International for the years 2021 – 2025.

Following a Plenary EU Parliament debate  on 7th March 2022, that took stock of the role of civil society in dealing with the challenges and threats stemming from Putin’s aggression in Ukraine, MEPs voted on 8th March in favour of proposals to counter the crackdown on civil society in Europe, with 526 votes for, 115 against, and 54 abstentions. See more here