Side event – The impact of criminalizing the knowingly use 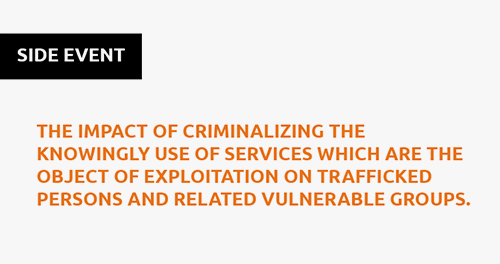 On 16th of June, La Strada International organised a side event during the 21st Alliance against Trafficking in Persons (OSCE) Conference. This conference ‘Confronting Demand: Tackling a root cause of trafficking in human beings’ was held from 14-16 June 2021. LSI’s side event focussed on ‘criminalizing the knowingly use of services, which are the object of exploitation on trafficked persons and related vulnerable groups’.

This side event was in particular organised to look more critically at the impact of criminalizing the knowingly use (and broadening of the criminal liability) on trafficked persons and vulnerable groups, as well as on the prosecution of perpetrators of human trafficking.

4 panellists, Maria Grazia Giammarinaro (Italy); Emily Kenway (United Kingdom), Barbara Zelikovics (Austria) and Irene Aboudaram (France) reflected on the legal aspects, the feasibility and practical application and effectiveness of such legislation and discussed the claims made by those currently strongly promoting ‘demand measures’. The 4 panellists reflected on existing legislation in their countries and in Europe broadly and raised concern about the strong focus on demand measures and highlighted the absence of evidence for claims made that the demand measures proposed, including the criminalizing of the knowingly use, will reduce human trafficking. Panellists further reflected on the negative impact of measures taken and raised concern about the narrow (often moralist) predominant focus on the prostitution sector, which has causes serious harm for sex workers. Criminalisation measures have moved the sector further underground, due to which sex workers have even less access to information and support measures.

The OSCE conference organised this year, was very strongly focusing on addressing prostitution, and many speakers repeatedly conflated addressing prostitution with addressing human trafficking. LSI is also concerned that civil society actors from the OSCE region, including La Strada International and its members – that work long time on assisting trafficked persons in the region – were not consulted or invited to speak.

A recording of the event will be shared soon.