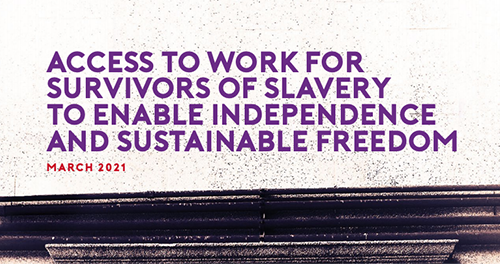 Several new publications were recently launched by La Strada International members. FLEX and Anti – Slavery International published with seven other UK based organisations a joint briefing  on access to work for survivors of slavery  and are calling on the Home Office to ensure that survivors of trafficking have access to work, which is vital in supporting their recovery and enabling independence beyond the National Referral Mechanism (NRM).

Also promoting access to employment, Animus Association in Bulgaria and LEFÖ IBF in Austria published with other NGOs a Guide for integrated service provision to support access to employment for Third Country National Women Victims of Trafficking for Sexual Exploitation in the framework of the ‘Tolerant project, an AMIF funded project aiming to enhance the integration of third country national women victims of trafficking in the labour market through employment support. A related Bulgarian national report and animation video were launched by Animus. LSI’s member ASTRA in Serbia recently launched the publication on Safety of trafficked persons see more.