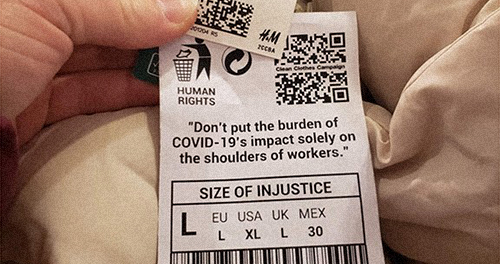 Over the past months, La Strada International has been supporting the Pay Your Workers / Respect Labour Rights campaign. This campaign has been launched and organized by the NGO Clean Clothes Campaign (CCC).

This campaign, which started during the COVID-19 pandemic, aims to fight economic injustice such as wage theft along global supply chains. Because of various restrictions introduced by governments, many major brands and retailers interrupted the supply of clothes without paying the factories. By consequence, such factories had to terminate the contracts with their workers, who are mostly women and did not even receive the severance pay.

Millions of workers in the global garment supply chain haven’t been paid their full wages or have lost their jobs without adequate financial compensation during the pandemic. The people who make our clothes have been earning poverty wages for decades which have left them no savings to fall back on.

Not only outside but also inside Europe, the situation is alarming. While earning a living wage is a human right, also garment workers in Europe struggle to make ends meet on their current wages. See also Clean Clothes Living Wages campaign, of which LSI’s member Open Gate is also partner.

La Strada International intends to keep on contributing to the campaigns of Clean Clothes by raising awareness on this issue via social media. We call for companies to act responsibly and in compliance with the United Nations Guiding Principles on Business & Human Rights, which affirm that companies should respect the human rights of the people their business affects.

Brands must #EndWageTheft in the global supply chain: Tell brands to #RespectLabourRights & #PayYourWorkers! Check out this Clean Clothes campaign page to take action and sign the petition!