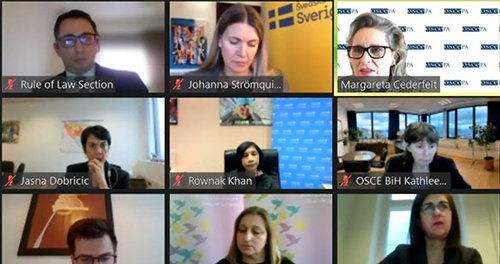 In preparation for an upcoming field visit, OSCE PA Vice-President and Chair of the Ad Hoc Committee on Migration Margareta Cederfelt (Sweden) and OSCE Special Representative and Co-ordinator for Combating Trafficking in Human Beings Valiant Richey are participating in a series of online meetings this week focusing on combating human trafficking along migration routes in Bosnia and Herzegovina. Key anti-trafficking actors including the National anti-trafficking Coordinator and members of the Parliamentary Joint Committee for Human Rights, as well as representatives of international governmental organizations including the Council of Europe, IOM, UNHCR, UNICEF, and non-governmental organizations engaged in migration issues, were met online.

Discussions focused on enhancing the effectiveness of procedures for identifying and protecting victims of trafficking in mixed migration flows and capacity building, with a focus on vulnerable categories such as women and unaccompanied minors. Interlocutors underlined the need to increase the awareness of migrants about the risks of trafficking and how to report it, and highlighted lack of trust in authorities as well as insufficient numbers of interpreters as significant barriers to the identification of potential victims. Recommendations were offered on how to improve prosecution and encourage proper sentencing such as through training of prosecutors and judges. Some also expressed concern about pushbacks at the borders.

The need for more co-ordination in the area of migration management at the national and regional levels as well as an adequate reception system that is better adapted to accommodate vulnerable categories of migrants was also highlighted. Some interlocutors expressed frustration over the lack of direct financing by the European Commission for migration-related activities and underlined the need for improved co-operation with countries of origin in the area of readmission of migrants. (source OSCE).