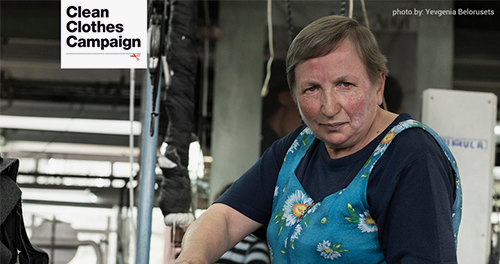 LSI’s member Open Gate, also member of Clean Clothes Campaign, is actively lobbying for a living wage; a salary from which people can live, for workers in North-Macedonia. In the ongoing struggle to improve working conditions and strengthen workers rights in the clothing industry, Clean Clothes Campaign has introduced a Europe Floor Wage: a cross-border major benchmark for wage living in Central Europe, which is based on the costs of living in 15 European garment production countries, including 7 EU Member states. The Europe Floor Wage benchmark is a concrete tool to show brands and governments what wage is needed to live on and it can be used by unions and labour NGOs to strengthen their bargaining power.

More than 2,3 million workers – mostly women – work in the clothing and footwear industry in Central, Eastern and Southeast Europe and are paid ‘poverty-salaries’. The legal minimum net salaries in these countries are under EU-defined poverty statistical lines and do not prevent workers from falling into poverty. At the same time, profits being made by brands and retailers in the garment supply chain are enormous, even during the pandemic. Even though a living wage is a human right and acknowledged by the EU, minimum wages are so low that workers are kept in poverty, in North Macedonia but also in other European countries.  See https://cleanclothes.org/campaigns/europe-floor-wage