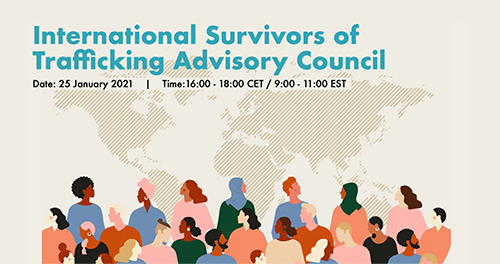 The Organization for Security and Co-operation in Europe Office for Democratic Institutions and Human Rights launched the International Survivors of Trafficking Advisory Council (ISTAC), consisting of 21 persons that have been trafficked, across the OSCE region. ISTAC should assist ODIHR’s work in combatting trafficking in human beings. The online launch event highlighted the role and function of ISTAC as well as its activities for 2021, in particular related to including and promoting the voices of survivors in all matters related to combating trafficking in human beings.

While La Strada International would have liked to see more diversity among the selected Council members and the countries they represent – Central and Eastern European countries are not well represented – it supports to promote the voice of trafficked persons in the field and congratulates all selected Advisory Council members, of which  some have worked or were supported by LSI members. Zita Cabais was strongly recommended by the Comité Contre L’esclavage Moderne (CCEM) in France. Another selected candidate, Mercy Obade from Kenya has closely worked with HopeNow in Denmark. Together with HopeNow staff she reached out to vulnerable people within the African diaspora, both men and women in Denmark. From Ireland, Mariaam Bhatti has been selected, an activist, community work practitioner, social researcher and, child minder who worked for our member MRCI, where for many years she was an organiser and activist with the Domestic Workers Action Group. La Strada International hopes to cooperate with the members of ISTAC.

In a letter to newly appointed ODIHR Director Matteo Mecacci, the International Committee on the Rights of Sex Workers in Europe (ICRSE) raised concern that none of the selected survivors has a background in sex workers’ rights, which ‘would have been an opportunity for all of the sex working community to be heard and included for the first time in such a high-level advisory body dealing with the issue of human trafficking’ according ICRSE.