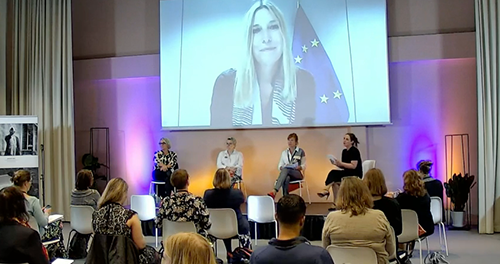 On 15th September La Strada International organised a public debate on the role of civil society in addressing trafficking in human beings and the shrinking space for NGOs. The event can still be watched here.

During this event, the different speakers explained how they work with civil society and how also anti-trafficking NGOs can make use of their mandate to report about challenges faced. The EU Anti-trafficking Coordinator reflected on the role of civil society related with the implementation of the EU directive and EU Strategy on combating trafficking in Human Beings, while the UN Special Rapporteur referred to the special – non judiciary – procedures, through which the Rapporteur can take action on violations committed against trafficked persons and on situations in which there has been a failure to protect their human rights, in such cases the UNSR can send communications to States requesting a response.

Petya Nestorova highlighted in particular the possibilities for NGOs to engage in GRETA’s monitoring work and reflected on good and best practices related to strategic partnerships between NGOs and governments, while also shortly reflecting on the upcoming GRETA visit to Belarus. Waltraud Heller of the FRA gave examples of numerous challenges faced by NGOs in EU countries ranging from changes in the legal environment, challenges in funding and accessing resources, to obstacles in accessing policymaking, and threats and attacks.

Speakers called for the need for governments to more effectively involve civil society in policy making and increase civic space in general, including by signing memoranda of understanding with civil society, providing civil society with longer term funding and support – especially when civil society is being asked to take up certain roles or has a commitment towards national strategies and action plans.

Recommendations for civil society included to remain very vocal and pro-actively continue to push for action; to change the narrative and show publicly the important role that civil society plays in society, and to focus more on the change we want to see. NGOs were also recommended to further build their own resilience and be prepared for crisis situations. They were also advised to make more use of the different mandates and the possibility to raise issues and submit complaints with existing bodies, next to continue to document what the situation is on the ground. Anti-trafficking NGOs were in particular advised to align more with other civil society actors in related fields and to link the trafficking issue more with issues of forced displacement, safe migration, racial justice and other human rights issues, including the issue of rights protection of vulnerable groups, including persons with disabilities.