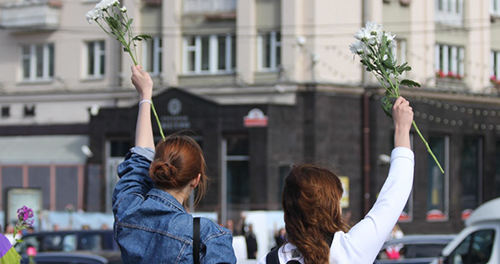 ‘You can cut all the flowers, but you cannot keep the Spring from coming’
– Pablo Neruda

Over the last weeks another wave of raids and detentions against Belarusian human rights defenders were reported. For years civil society actors have been facing pressure from the government, including NGOs that work on women rights and against trafficking in human beings. 161 human rights organisations, including La Strada International, have demanded an end to the repression against human rights defenders in Belarus.

The organisations condemn the systematic arbitrary arrests, beatings and acts of torture they are subjected to. Despite all-out repression by the Belarusian authorities, human rights defenders in Belarus continue to strive to protect human rights, although many already left the country for safety reasons. The new raids started only one day after the United Nations Human Rights Council adopted a resolution condemning the situation of human rights in Belarus, demanding the release of all persons arbitrarily detained and an investigation into allegations of torture and other human rights violations.

This repression is a blatant retaliation for their work denouncing and documenting human rights violations ongoing since the brutal crackdown against peaceful protesters in the wake of the August 2020 election. Since August 2020, more than 35,000 Belarusians were arrested for participating in peaceful protests, around 3,000 politically motivated criminal cases were initiated, at least 2,500 cases of torture of Belarusian citizens were documented. These systematic and widespread human rights violations may amount to crimes against humanity. As of July 19, 561 persons in Belarus are considered political prisoners.