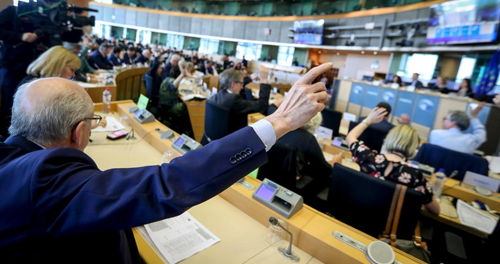 The INTA committee voted in May on the draft resolution for a trade instrument to ban the import and export of products made or transported by forced labour. The resolution was adopted by 37 votes, with no votes against and five abstentions. The draft resolution is scheduled to be debated in June and it is expected that the resolution will feed into the Commission’s proposal on how to ban forced labour products. The new legislative instrument is planned for September 2022. The European Commission has now launched a public consultation where you can provide your feedback on this proposal until 20 June 2022.

The European Parliament has asked for a legislative proposal on an effective traceability mechanism for goods produced through forced and child labour. This could pave the way for a complete ban on the importation into the EU of goods produced through modern forms of slavery or forced labour, especially forced work of vulnerable groups extorted in violation of basic human rights standards.

The Parliament considers that forced labour and child labour need to be taken into account in international trade relations. Therefore, it has called on the EU to reflect on ways of finding evidence of these practices, and in particular to establish an effective traceability mechanism for the goods being produced by means of forced or child labour in order to ban imports of these goods. The recommendation to the Commission to initiate a legislative proposal on a traceability mechanism banning the import of goods produced using modern forms of slavery or forced labour was put forward in a 2010 resolution on human rights, social and environmental standards in International trade agreements.