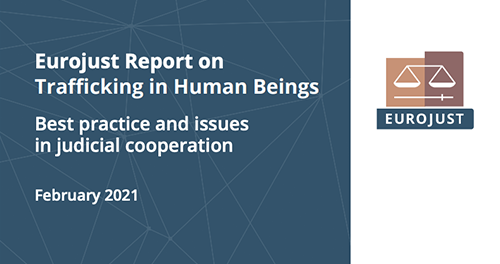 In February, Eurojust launched a new report on Trafficking in Human Beings; Best practice and issues in judicial cooperation’. This report presents Eurojust’s practises in complex Human Trafficking cases requiring judicial coordination. The first part relates to the coordination of investigations and the second to victims’ rights, including their safety, position and ability to participate in witness protection programmes.

Between January 2017 and June 2019, EU Member States and third countries referred 405 THB cases to Eurojust for judicial cross-border cooperation. In most of these cases, European citizens were the victims, exploited by other European citizens. The Report analyses 91 of these cases and 59 JITs into THB cases supported by Eurojust. It lists best practice for Member States and practical matters for which support was asked, such as resolving conflicts of jurisdiction and assistance with the execution of European Investigation Orders (EIOs).

Eurojust encourages Member States to ask for its involvement at an earlier stage, to counter organised international crime groups (OCGs) and to facilitate a rapid information exchange with Europol and national authorities. For years, La Strada International is advocating for adequate cross border cooperation of all relevant stakeholders to ensure adequate access to protection and support for victims of trafficking, including for claiming compensation. See also our working paper on Cooperation on Access to Compensation in a Cross-border Context in 2018.