EC Regulation on prohibiting products made with forced labour 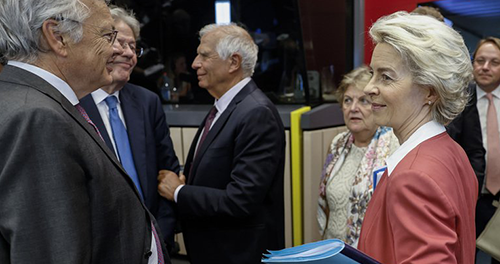 In September the European Commission proposed a regulation to ban products made from forced labour, within and outside the union. While La Strada International supports the proposed ban, we are concerned that the current proposal does not include measures to secure rights and remedies for affected workers. Another point of critique by us and other civil society organisations is that EU’s proposed ban does not specifically mention state-induced forced labour.

Like other NGOs, La Strada International earlier welcomed the call for a Europe-wide, far-reaching ban on forced labour in the supply chain believing that this instrument can help to identify and further raise awareness about exploitative labour sectors in Europe and ensure better implementation of existing legislation on labour rights, forced labour and trafficking by companies and member state authorities.

However we have requested together with Anti-Slavery International and PICUM and others, that the ban and related measures should focus on improving conditions and access to remedy for all workers, including undocumented workers and those in irregular work. Access to remedy for workers, including for the possible negative impacts of the ban on workers is essential and assessments of the impacts of a product ban should be carried out, involving workers, their representatives and other specialist NGOs.

The new EC proposal covers all products, namely those made in the EU for domestic consumption and exports, and imported goods, without targeting specific companies or industries. National authorities in the Member States will have to assess forced labour risks based on many different sources of information including submissions from civil society, a database of forced labour risks focusing on specific products and geographic areas, and the due diligence that companies carry out.

In case of well-founded suspicions of forced labour use, investigations should be carried out by Member States, who can request information from companies and carry out checks and inspections, including in countries outside the EU. If national authorities find forced labour, they will order the withdrawal of the products already placed on the market, and prohibit to place the products on the market, and to export them. Companies will be required to dispose of the goods. If the national authorities cannot gather all the evidence they require, for instance due to the lack of cooperation by a company or a non-EU state authority, they can take the decision on the basis of the available facts.

The proposal now will be discussed and agreed by the European Parliament and the Council of the European Union before it can enter into force. It will apply 24 months after its entry into force.

The Commission will also issue guidelines within 18 months from the entry into force of this Regulation. The guidelines will include forced labour due diligence guidance and information on risk indicators of forced labour. The new EU Forced Labour Product Network will serve as a platform for structured coordination and cooperation between competent authorities and the Commission.

See also the EC Communication on Decent Work Worldwide presented in February 2022 which sets out the internal and external policies the EU uses to implement decent work worldwide, including through international partnerships, trade, EU neighbourhood and enlargement, trafficking and public procurement. Further, in July 2021, the Commission and the European External Action Service published Guidance to assist EU businesses in taking appropriate measures to address the risk of forced labour in their operations and supply chains, as a bridge towards mandatory horizontal due diligence legislation. In its proposal for a Corporate Sustainability Due Diligence Directive adopted in February 2022, the Commission set out due diligence obligations for larger companies to identify, prevent, mitigate and account for actual and potential adverse impacts on human rights, including labour rights and the environment along global supply chains.