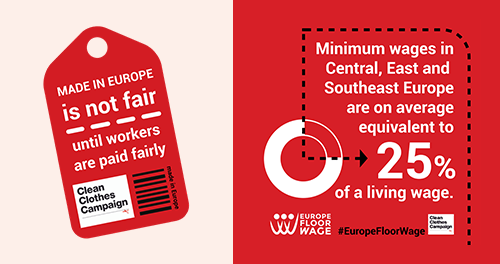 Earning a living wage is a human right but garment workers in Europe struggle to make ends meet on their current wages. In 2020 Clean Clothes Campaign (CCC) developed a benchmark for living wages in European countries that reflects the reality of garment production in Europe.

More than 2,3 million workers – mostly women – work in the clothing and footwear industry in Central, Eastern and Southeast Europe. They are paid salaries on which they can hardly survive. The legal minimum net salaries in these countries are under EU-defined poverty statistical lines and do not prevent workers from falling into poverty.

Buyers should pay the full price for the production of a garment. This includes a wage that the workers making the products can live on. Earning a living wage is a human right, but garment workers’ wages in Europe are far below the poverty line. In fact, the gap between current wages and a living wage is often bigger in European production countries than in Asian production countries. Brands take advantage of the fact that most people are unaware of this. Consumers are offered false assurances of fairer conditions when products are “made in Europe”. LSI’s member Open Gate/Otverena Porta is member of Clean Clothes Campaign and Otverena Porta advocates for a living wage in North Macedonia.