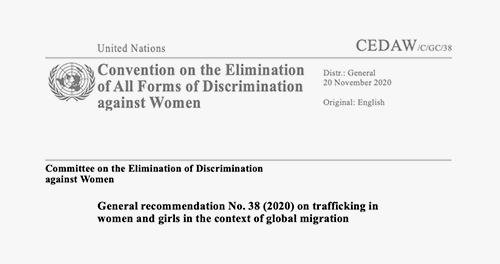 The CEDAW Committee has adopted its new General Recommendation N 38 on trafficking in women and girls in the  context of global migration.  This General Recommendation is the outcome of a two-year process of deliberations and consultations, that La Strada International, GAATW and many others participated in through the provision of written feedback and attendance of various consultations. Concerns were raised  about some aspects of the draft, including paragraphs calling on states to address demand for human trafficking for sexual exploitation in a way which often leads to measures which violate sex workers’ rights.

The final text was adopted on the 6th November following the first draft published in April. The final version substantially differs from the first draft and is fairly comprehensive and progressive, listing many of the protections advocated for by civil society, such as more regular migration pathways, end of tied/sponsorship visas, access to social protections, remedies, legal aid, labour protections and inspections in the informal sectors and an end to forced rehabilitation and conditional assistance.  It calls on States to introduce labour legislation to protect all women workers, including those in the informal economy and “condemns … violent raids and entrapment operations by law enforcement”.

This week IWRAW organised the webinar ‘Feminist Analysis of CEDAW general recommendation No. 38’ where different speakers reflected on the new Recommendation. Listen to the recording here.