Asian chefs exploited in the Netherlands 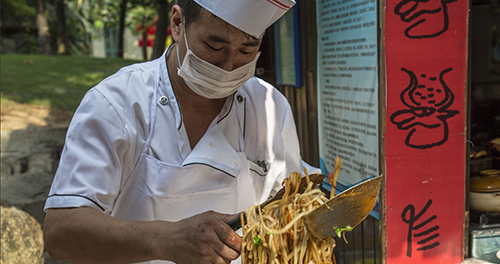 More than five hundred Asian cooks received a visa from the Dutch Immigration and Naturalisation Service (IND) to work in the Netherlands last year. However there is often no work or they are paid far too little, according to research by the Platform for Investigative Journalism Investico.

Restaurants barely opened in the Netherlands last year, but since the COVID 19 outbreak, the IND has issued more than 500 work visas to Asian migrants to work in the Dutch hospitality industry, according the researchers. Some of these migrants arrived at the Dutch airport to discover that there is no work for them at all, or that they were paid much less than promised. “The Asian migrants Bovenkant formulierpaid thousands of Euros to intermediaries who arranged a job and promised “a new opportunity” in Europe. In doing so, they make use of a special Dutch migration scheme for Asian chefs, which was expanded in 2019 despite previous cases of exploitation”, as well as the high unemployment among Dutch cooks and other catering staff due to the closure of many restaurants.

The researchers of Investico spoke with social workers, lawyers and other experts in the field and with Asian migrants themselves and examined the experiences of more than ten migrants. “These migrants often work twelve hours a day, are underpaid and have to return hundreds of euros of their paid wages to their boss, sometimes earning only a few hundred euros a month. In the meantime, their employer receives a wage subsidy from the Dutch government as part of the COVID support programme. Many migrants do not dare to go against their boss, because they lose their work visa if they are fired”.

According the investigative journalists, the migrants – who upon arrival discover that there is no work for them at all, or who have been fired due to Corona – are now competing with each other for the scarce workplaces in takeaway kitchens. “Going back home is difficult because of the heavy debts they have incurred to get here. The journalists also reported that the Dutch Labour Inspectorate promised extra controls earlier, but these were postponed due to COVID restrictions. Nevertheless the Inspectorate has been receiving more complaints over the last years about possible severe labour exploitation cases of persons employed at Asian restaurants. In 2020 a total of 24 notifications were received.

Several shelters in different Dutch cities now accommodated Asian cooks. Due to the debts they can not return to their home countries. See full article Investico wrote for the Dutch magazine De Groene Amsterdammer and Newspaper Trouw (In Dutch only).

Next to better control and investigation of these exploitative practices, La Strada International calls for those workers to receive access to support and complaint mechanisms and to obtain the possibility to change employers without restrictions.