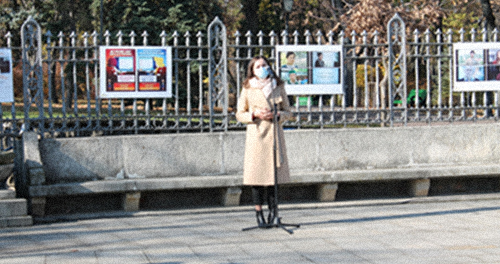 On 3 November, La Strada Moldova celebrated its 20 years of activity. For this occasion, an exhibition was launched, related to the projects and campaigns that the organisation has implemented since 2001.

This day the organisation looked back at its history and achievements  Since 2009, the organisation runs the Hotline for Women and Girls, which has received over 20,000 calls. More than 500 women and 640 children who have gone through traumatic experiences of domestic violence or sexual abuse have benefited from the assistance of La Strada psychologists and lawyers in the country. The organisation also opened the first national Hearing Room for child victims or witnesses of the crime and designed and implemented over 20 information and advocacy campaigns. The organisation further contributed to the elaboration and promotion of 10 laws, 5 strategies and national plans in our fields of activity. 15 generations of volunteers, who became an important voice in promoting non-violence among the younger generation, were educated.

The celebration event was attended by several special guests, including representatives of the Ministry of Education and Research and the Ministry of labour and Social Protection, as well the US Embassy in Chisinau and UN Women Moldova.

During the month November, La Strada Moldova reviews the progress made and the lessons learned over two decades, in the form of an anniversary campaign with the motto Change in us can change things. The Executive Director of “La Strada”, Elena BOTEZATU, explains the slogan:

“La Strada (Moldova) has been and continues to be a reference organization in the field of protection and promotion of the rights of women and children who have suffered or are facing various forms of violence. But this status was built through hard work, a lot of courage, perseverance and lessons learned from our beneficiaries. Every service, every campaign, every bill we have contributed to has been inspired by the needs and expectations of the women and children we work for every day. They helped us understand what is wrong, what needs to be changed. They have shaped our structure, approaches, work tactics over time. They also judged us best and taught us what we need to correct in the opinions and attitudes of those on whom the well-being of women and children at a standstill depends. This campaign is, if you will, a compliment to the winners we have met along the way”.