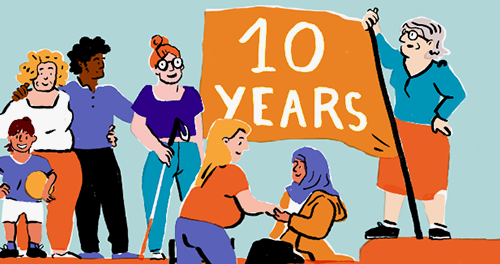 Based on a victim-centred approach, it offers practical tools to ensure the protection of women and girls, their safety and empowerment and links to the wider goal of achieving equality between women and men. Over the past 10 years, it has guided numerous states in advancing their legislation and policies in order to prevent and combat violence against women effectively.

So far thirty-four member states of the Council of Europe have ratified it, twelve have signed it – along with the European Union – and it is used as a basis for action by many countries outside Europe. Unfortunately it is still not ratified by several countries, where La Strada members are based including Bulgaria, Belarus, Ukraine and Moldova. Our members in these countries have been lobbying for the last 10 years to get the Convention ratified.  This month they organised or contributed to (online and offline) events and other actions to call again upon their governments to ratify the convention.