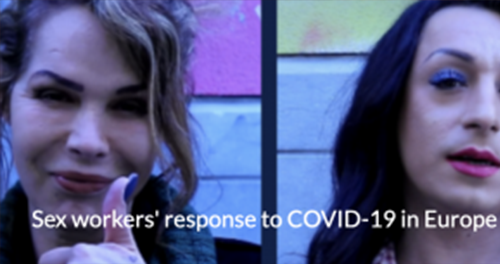 Sex workers of all genders have been amongst the hardest hit by the COVID-19 pandemic in Europe and Central Asia. Lock downs, self-isolation and travel restrictions have put us out of work, pressing some onto the streets and into destitution, where the risks are heightened by the pandemic. As sex work is criminalised to varying degrees in all countries of the region, most of us have been unable to access the safeguards provided for many other workers, such as sick pay and social benefits.

Our communities all across Europe report systemic exclusion from government bailouts and support measures to substitute missing income, and in many contexts we are even facing heightened surveillance and policing. A large number of undocumented migrants working in the industry face no protection from states and social services, whilst trans sex workers and women of colour struggle with extremely high levels of discrimination and violence.

In this context, the International Committee on the Rights of Sex Workers in Europe (ICRSE) has set up a website to monitor and document the situation and allow sharing of information between sex worker rights groups, allies and supporters and amplify the sex worker movement’s demands. Even is these hard times, we come together online, support each other and defy the victim label that has been attached to us for so long by abolitionist activists and governments.

Our organisations are calling European governments and institutions to develop and implement evidence-based and rights-based policies to include and protect all sex workers in this crisis and the disastrous aftermath which will follow. We already know that after lifting of lockdowns, an increasing number of women, migrants and LGBTIQ people will enter the industry, having lost their jobs, accumulated debts and been pushed into precarious living situations.

Sex workers, as any other community, want to support national efforts to end the pandemic and respect the measures such as self-confinement.  However, left without any income and support, many of us will have to continue to work in order to feed ourselves and our families and pay our housing and other basic costs.

We demand that all sex workers, together with other informal workers and unpaid or underpaid care workers, receive an immediate and easy-to-access income substitution. This income should be available to all of us, irrespective of our immigration status. Sex worker-led community organisations must be included in the development and disbursement of these funds as our collectives are the best placed to provide emergency support and are trusted by our highly stigmatised community.

Many sex workers are furthermore at risk of becoming homeless, having lost our primary source of income and due to the closure of workplaces, where a lot of us used to reside. A moratorium on evictions should be introduced and those who struggle with rent or mortgage payments should be supported, while emergency housing options must be allocated to those in urgent need, with a special view to those at risk of abuse or violence in their residence.

Criminalisation and penalisation of sex work has been condemned by sex workers, human rights and health organisation across the globe. Despite evidence that criminalisation and policing cause a three times higher chance of experiencing sexual or physical violence for sex workers, and those affected are also twice as likely to have HIV and/or other sexually transmitted infections (STIs), we are constantly surveilled, fined, arrested and deported for working and sharing workplaces or just being visible to society as migrants, people of colour, homeless or LGBTIQ people.

In the current context, criminalisation of sex work must stop and police should instead refer vulnerable groups to essential services. People arrested and detained on prostitution and other non-violent charges – including those in administrative immigration detention – must be immediately released. A moratorium on sanctions for irregular status is also essential; no return or removal procedures should be started or implemented. Firewalls need to be implemented between immigration and health and social services so that people can access health care and essential services without any fear of deportation.

Sex workers’ health is compromised by various factors, including intersecting discrimination and criminalisation. In previous epidemics, such as the HIV/AIDS crisis, sex workers, especially trans sex workers and sex workers of colour, have been scapegoated by society and media and labelled ‘vectors of disease’. The current COVID-19 pandemic greatly increases sex workers’ vulnerabilities to poor health, in particular due to the closure of most community services, deteriorating mental healh in destitute situations and widespread stigmatisation.

We demand that messages related to COVID19 are distributed to the most excluded and marginalised in society, including sex workers, (undocumented) migrants, those in rural areas and LGBTIQ people, in formats and languages accessible to them. It is of utmost priority to maintain sexual and reproductive services and transition-related healthcare and expand capacities to reach groups who are often led behind in the response to sexual and gender-based violence. Access to preventive and curative health care must be guaranteed for all, including testing for COVID-19, with particular attention to the most marginalised groups in society, irrespective of their immigration status.

As the pandemic has dramatically demonstrated, Europe must implement large-scale social changes for the sake of the most vulnerable and for society at large. Whilst direct measures described above must be implemented without delays, long-term reforms are also necessary to end inhumane inequalities. We demand that undocumented migrants, including those working in the sex industry, have accessible possibilities to regularise their status on various grounds, developed and implemented in partnership with migrant community and support organisations. We demand that all residents can access health and other services, rental accommodation and justice equally and without fear of arrests and deportations or criminalisation of service providers. Economic reforms, including basic care or universal income must be developed to end poverty affecting women, LGBTIQ people and other excluded groups. Finally, after decades of failed criminalisation and prohibition, governments must introduce the decriminalisation of sex work.

The pandemic shines a red light on the scandalous inequality and social exclusion faced by sex workers: only by listening to sex workers and implementing those crucial reforms can our health and lives be protected. Click here to read a detailed list of policy demands.